Process to link DBT accounts with Aadhaar to be overhauled In a meeting held at the cabinet secretariat last week, banks were directed to halt the current process for the next 10 days starting Monday until their core banking software was amended to adopt the new system. Under the prevailing system, customers linking their bank accounts with Aadhaar meant automatically mapping them to the Aadhaar payment bridge hosted by National Payments Corporation of India.

Since government departments send subsidies to the payment bridge, the money was automatically transferred to the last account seeded with Aadhaar.

The overhaul comes after allegations that top telecom service provider Bharti Airtel used the electronic know-your-customer (e-KYC) verification process mandated by the Aadhaar Act to open payments bank accounts without users being aware of this. These were then alleged to have been mapped as the accounts to which subsidy payments would be directed without their informed consent. This led the Unique Identification Authority of India (UIDAI) to temporarily bar Bharti Airtel and its payments bank from using Aadhaar linking for mobile verification or opening new accounts. 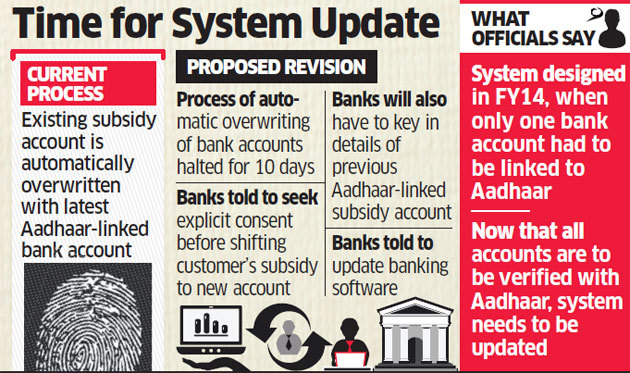 “We reviewed the entire system when the Airtel issue cropped up and we have decided that overwriting should be replaced to make it more restrictive,” said an official of the Direct Benefits Transfer (DBT) Mission. Another layer will be added to the mapping process so that banks overwriting an already Aadhaar-linked subsidy account will have to check which one will receive such payments.

The cooking gas subsidy of 4.7 million customers totalling around Rs 167 crore was sent to Airtel payments bank accounts in the past two months. “We started receiving a lot of complaints since people were not aware that their subsidy was being directed to new accounts and they assumed the government had stopped their welfare payments, said a UIDAI official.

“We believe that it will stem some of the over-enthusiasm by companies to make their own accounts as primary accounts for receiving government subsidy without the explicit consent of the customer,” said the DBT Mission official. “Now this automatic route will not be possible unless the customer explicitly asks for the subsidy account to be changed.”

A finance ministry official said it had been decided jointly by all stakeholders including National Payments Corporation of India that customers’ informed consent was needed.

“Norms will soon be worked out by IBA (Indian Banks’ Association) on this,” he added. The government has asked banks through IBA to amend their software. Until the additional feature is made available, there should be no overwriting, it has said. The new system should be ready in the next 10 days, said the DBT official. IBA has decided to hold a meeting next week with banks on a new form that will list the existing Aadhaar-linked bank accounts of customers, asking them which one is for subsidies, IBA CEO VG Kannan told ET. UIDAI issued a notice to the company in September after receiving complaints about Bharti Airtel allegedly opening bank accounts without the knowledge of people.

SYSTEM AMENDED
Airtel told ET in a statement that it had sought to amend its system. “After UIDAI had brought the issue to our notice, we had put in a process, wherein, every customer had to give an explicit consent to open a bank account,” it said.

“The express check within the app was also changed to opt-in mode.”

The current system dates from 2013-14 when only one account held by a person had to be linked to Aadhaar to receive subsidies. The current situation has emerged because the government has mandated that all accounts have to be verified with Aadhaar, said the DBT official.

“Financial companies had to make the distinction between seeding and mapping, but they didn’t do that, so, we had to change the system,” added the DBT official.

and are aggressively reaching out to customers for new accounts and their services, said the UIDAI official.